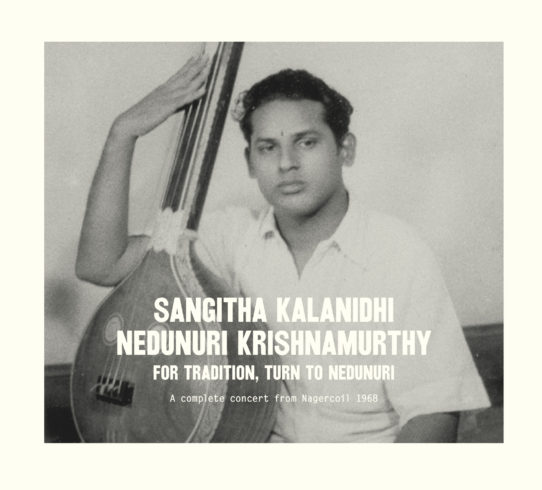 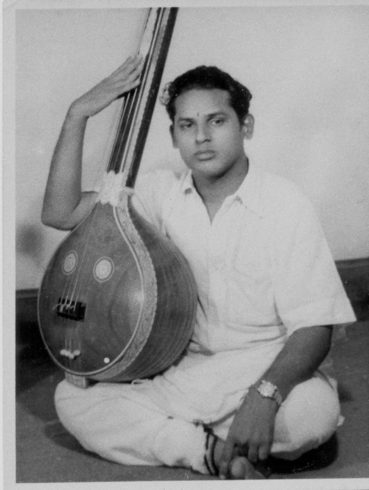 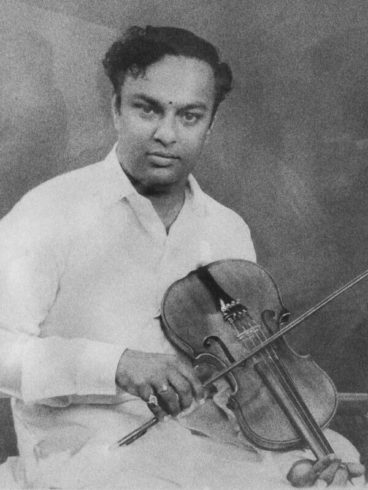 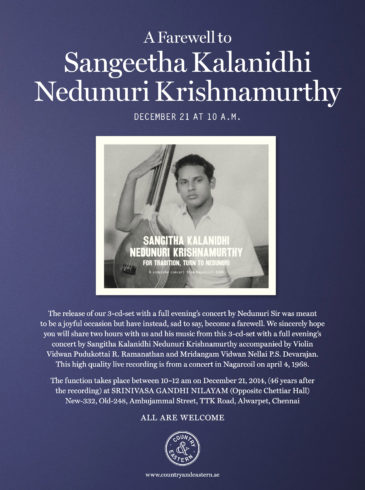 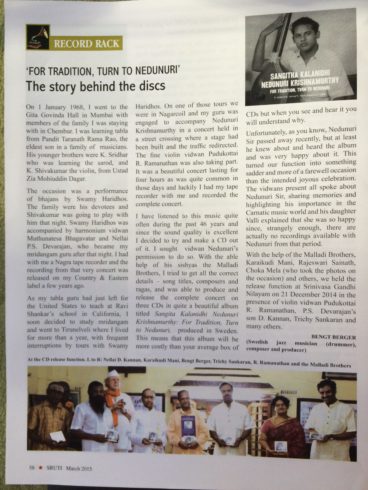 ”For tradition, turn to Nedunuri – that is what the elders say”. Sangeetha Kalanidhi Sri Nedunuri Krishnamurthy, is with his 80+ age one of the very few remaining great vocalists from the golden period of Karnatic music. In 1968 he was at the height of his powers and I managed to capture a full evening concert that lasted nearly four hours in Nagercoil in Tamil Nadu. C&E is extremely proud to release the complete concert in a 3-cd set. Soundwise this is a high quality release, a unique document from nearly 50 years ago with music that will delight the lovers of Karnatic music and win new followers for this art form, perhaps the greatest we have.

Only two weeks before the release Sangeetha Vidwan Nedunuri Krishnamurthy passed, thereby turning what was supposed to be a joyous occasion into more of a farewell. Many great vidwans graced the occasion sharing memories of Nedunuri Sir. 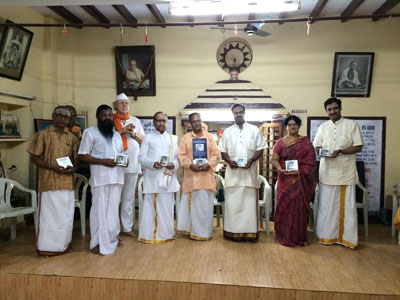 Pudukottai R. Ramanathan, was born in 1938, holds a bachelor of Music from Annamalai University and learned from Sangita Kalanidhi Kumbakonam Rajamanikyam Pillai and has now been active in music for sixty years. Besides being a noted soloist and accompanist, he is also a composer and has received several titles.

PRESS (in english):
United Mutations 20141203: http://united-mutations.blogspot.be/2014/12/sangitha-kalanidhi-nedunuri.html
“this album… will now become a classic palimpsest
of Carnatic music; a tribute not only to that enduring tradition that
goes back thousands of years. But it has also become a collector’s
piece by one of the last great vocalists in the Carnatic tradition… This recording will be famous for the fact that much of this tradition has been preserved for future generations of vocalists and disciples to learn from. Bravo Bengt Berger and bravo Country & Eastern for bringing this concert to fruition.” Raul Gama, World Music Report
“I can think of no better way to immerse yourself in en entire evening of glorious South Indian Music” Maria Lord, Songlines
“It is heartfelt tribute to the virtuosity, soulful and playful artistry of Nedunuri Sir and a rare document that feature the depth and the richness of the Carnatic music in its glorious beauty.” – Eyal Hareuveni, Salt Peanuts